Multiscale material modeling offers the promise of being able to determine material properties from simulations or measurements of the microstructure and then representing these effects on material behavior at a larger size scale. One application of this method is in determination of material anisotropy from crystalline orientation distribution functions to calibrate anisotropic yield surfaces used in full scale sheet forming calculations. 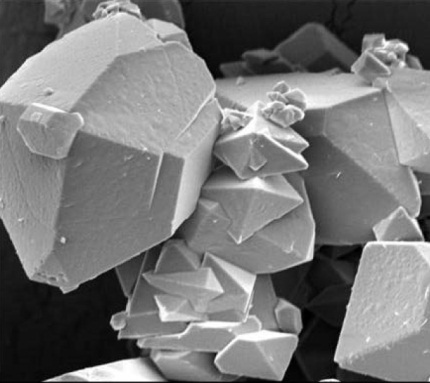 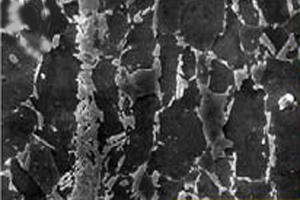 Nowadays, subjects such as boundary & grain boundary, crystalline settling of material, their slipperiness, alteration of the shapes of crystals as a result of loading, and the effects of boundary in reinforcement of materials has been increased the importance of microstructural topics.

In this project, we simulate the poly-crystals which are involved in different phase. In other words, there are different materials in one kind of substance; for example, steels which are made of martensite and ferrite phases.

The dual phase steels are ideal for meeting auto industry requirements for weight reduction and safety. Due to their balanced ferrite and martensite contents they offer a particularly attractive combination of high strength, low yield-to-tensile ratio, good cold formability, and weldability.

High Work-Hardening rates reduce the risk of local necking during and light forming operations result in a major increase of strength in the formed areas. Final component strength is additionally determined by the high back hardening potential. 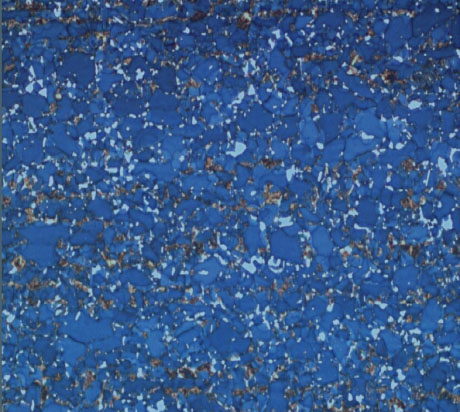 In addition to martensite, there may also be some amounts of retained austenite, which improve the formability.

For example in this image, the ferrite grain bodies appear in brown or blue tones, martensite in brown and structurally weak martensite and retained austenite in white. 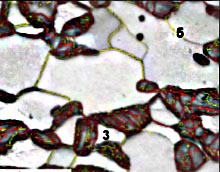 An SEM picture of a real dual-phase material is shown in this figure. The image includes different phases which are settled side by side. The red and yellow boundaries show different crystalline directions of the grains.

A program which uses image processing was developed with the following characteristics:

1- A Matlab code was developed which separates the materials boundary from different phases.

2- According to the color of lines in the image, the direction of each grain was determined based on the real data.

3- A PYTHON code is then used to transfer the processed data to the ABAQUS software.

4- The grain sizes and crystal orientations were used to construct a finite element model of a representative volume element in which each of the grains was descretized by several elements. 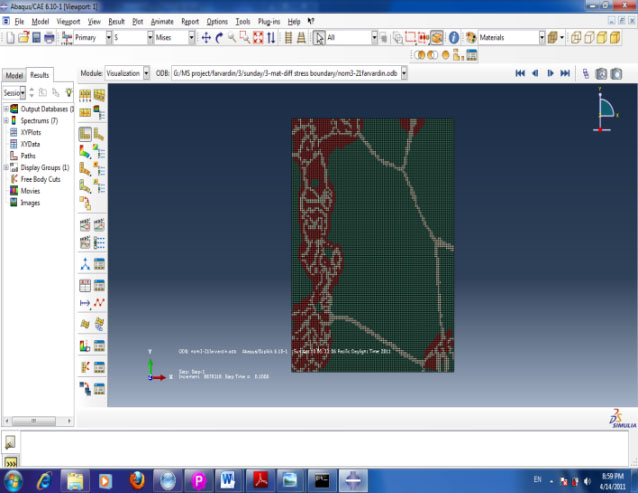 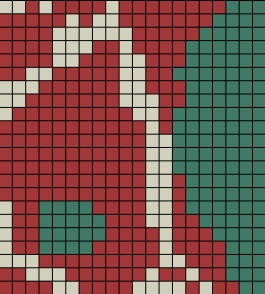 5- The elastic plastic, damage parameters or crystal plasticity model can be used to express the behavior of different phases 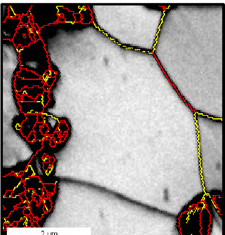 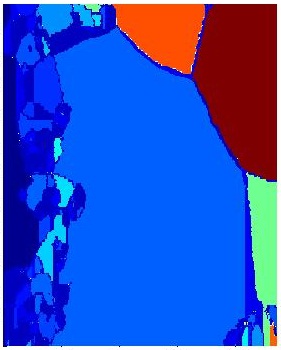 The constitutive relation for some grains was determined using a crystal plasticity model. This accounted for some nonuniform deformation within the grains while satisfying compatibility exactly and equilibrium in an approximate descretized sense.

A Taylor model, relaxed constraint model or self-consistent model could also be employed.

6- Multiscale modeling with crystal plasticity constitutive relations is used to determine the average response of a polycrystal.

The measured crystallographic texture of a metal is used in a crystal plasticity model to construct a yield surface that exhibits normal-shear coupling.

7-The stress-strain graph was then plotted and compared with experimental results.