Bird strikes have been one of the most dangerous threats to both civil and military flight safety. The consequences of bird strike can be fatal, therefore, it is critical to ensure that different structural parts such as compressor blades, windshield, wing and tail leading edges are able to resist such high energy impacts and guarantee safe landing of the aircraft when impacted by birds. 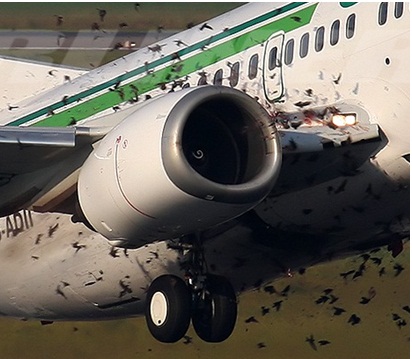 Fig. 1 Birds with different orientations when impacting an aeroengine (Courtesy of Luis Pontes)

In a bird strike, the bird behaves like a fluid, undergoing extreme distortion while its body breaks up into debris particles. Capturing these behavioral aspects in a numerically stable method presents numerous challenges for the aircraft industry. Explicit FE analysis is a numerical technique commonly used for the analysis of highly non-linear behavior of materials with inelastic strains, high strain rates, and large deformations such as would occur during crash or impact situations. The technique is particularly well suited to scenarios such as bird-strike where bird and impacted structure materials go under large deformations.

One commonly used approach models the bird using a solid Lagrangian FE model. The Lagrangian method uses material coordinates as the reference, i.e. the nodes of the Lagrangian mesh are clung to particles in the material. While this method is able to capture the distortion and, to a limited extent, the breakup of the bird, there are several major disadvantages. Primarily, the material of the bird cannot move relative to the mesh. Since in this method the material moves with the mesh, if the material suffers large deformations, the mesh will also suffer equal deformation and as a result the element dimension becomes very large in one direction, and very short in the perpendicular direction. With the stable time step for an explicit FE analysis being proportional to the shortest element dimension, the simulation time step drops as the mesh of the bird distorts upon impact, causing a significant increase in simulation time.

Another alternative method to the Lagrangian and ALE method is Smoothed Particles Hydrodynamics method. The SPH method is a gridless Lagrangian technique used to model the fluid equations of motion using a pseudo-particle interpolation method to compute smooth hydrodynamic variables. In this formulation, the fluid is represented as a cloud of moving particles, each one representing an interpolation point, where all the fluid properties are known. Since the SPH method is mesh-less, then large distortions leading to numerical errors associated with the Lagrangian method would not exist. Another advantage correspondent to the SPH method is that the SPH elements can be defined at the tips of same dimensioned adjacent cubes, thus, the mesh can uniform and homogenous in all directions, i.e. the distance between two neighbor nodes can be the same at any position in a simple or a complex SPH bird model.

The reliability of the numerical results is critically dependent on the accurate modeling of the temporal and spatial distribution of the impact force between the bird and the target. An accurate finite element bird strike simulation requires modeling the real geometry and material properties of both the bird and the target. The complex and intricate geometrical configurations of different bird species have perpetually posed a problem for developing a sufficiently simplified and consistent bird model. The bird body consists of many different organs with different densities, materials etc. However, in order to predict the damage of the structural components during a bird-strike event, researchers have created a number of appropriate numerical bird models which can reproduce the pressure distribution a real bird imposes on a target structure relatively well. Many researchers have simplified the bird torso as a hemispherical ended cylinder. The ellipsoid geometry is also a well accepted choice, which has been suggested by the international bird strike research group. Besides these two configurations, the straight-ended cylinder has also been adopted, but its application remains somewhat infrequent. The results show that the initial contact area between the bird and target in the early phase of the impact event would have a significant effect on the peak impact force. The aspect ratio of the bird striking both rigid panel and flexible fan blade was found to have little influence on the normalized impact force and impulse. 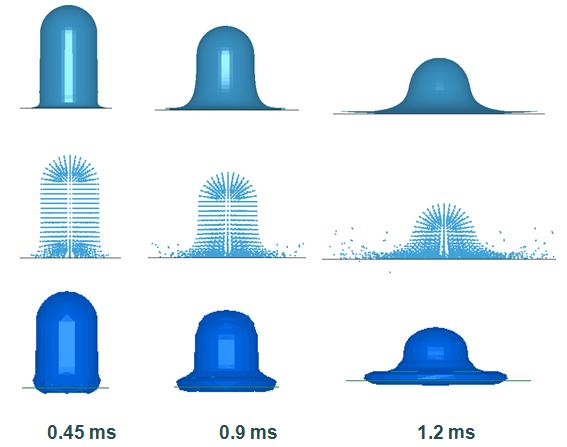 Fig. 3 Impact of a hemispherical ended cylinder with a rigid plate by different solution techniques

The anatomic structure of birds includes several internal cavities, such as pneumatic bones, lungs and peculiar air sacs that contribute to the complex bird’s makeup. Therefore, for the first time a real mallard anatomy was numerically created and then used by a novel finite element method called Smoothed Particles Hydrodynamics (SPH). The result produced by the real bird was compared to that of the traditional bird models. The effects of considering the cavities, air, and different orientations at which a mallard strikes a target are also investigated. 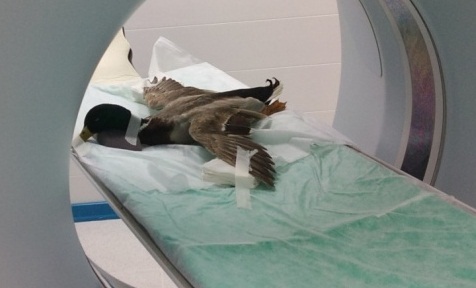 Fig. 4 Setup of the real mallard while taking CT scan

It was found that in the impact from tail side, the new mallard model can better correlate with experimental data than the traditional bird model, i.e. the hemispherical-ended cylinder. Using a mallard model with the shape similar to a real mallard makes it possible to investigate the effect of orientation at which a bird impacts a surface. In order to study the effect of orientation of bird on bird strike events, four impact scenarios were considered and simulated. Pressure peaks at the center and other positions on the target were investigated and compared to each other. Finally, it was found that the impact from the bottom side is the most damaging scenario, while the impact from the wing side is the safest impact scenario. While in the impact from bottom side, four sensors reach pressure peaks of more than 90 MPa, in the impact from tail side, the sensors do not reach maximum pressure of more than 40 MPa. Thus, refinements to the numerical models are necessary for building a safe and sound structure to sufficiently resist against real bird strike events. 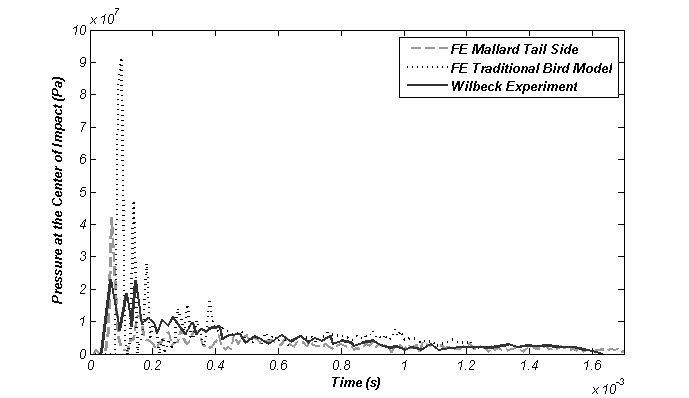 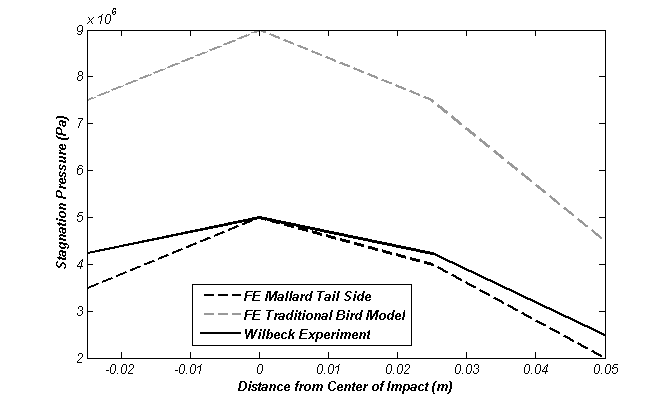 We have 210 guests and no members online