Ideally, these systems are tuned and all blades are identical but, in practice there always exist small, random differences among the blades. Mistuning, imperfections in cyclical symmetry of bladed disks is an inevitable and perilous occurrence due to many factors including manufacturing tolerances, variations in material properties and wear in service. Each blade on a disk is almost always slightly different to the others. It can cause some unpredictable phenomena such as dramatic difference in forced vibration response. This survey explains the fundamental techniques of mistuning in some details. 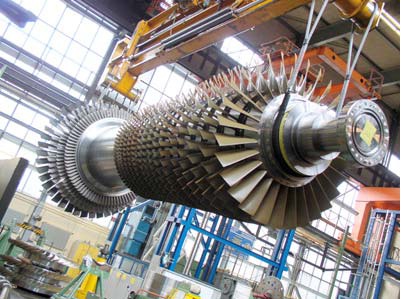 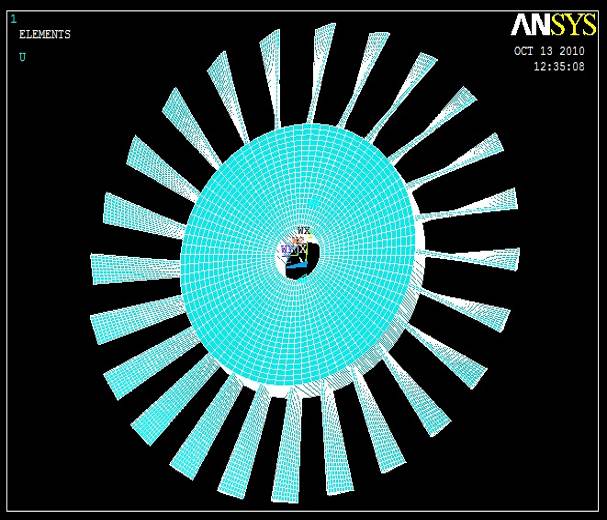 The finite elements are all eight-noded brick elements. The model then used to calculate the free and forced frequency response of the blades for the tuned system. Next, two hundred experiments, with different young’s modulus for each blade, were selected in a specified range. For each test case calculations were performed and the maximum response was obtained. Then, by developing an algorithm based on neural networks (NN) and genetic algorithm (GA) the worst frequency response of the mistuned bladed disk system was calculated. The problem of finding the worst specification is formulated as an optimization problem. The developed technique was very fast and can predict the worst response with a good degree of accuracy. Based on the calculated parameters, a new model was created and the maximum response of the mistuned system was calculated. Next, the tuned and mistuned responses of bladed disk system were compared (Fig. 3). 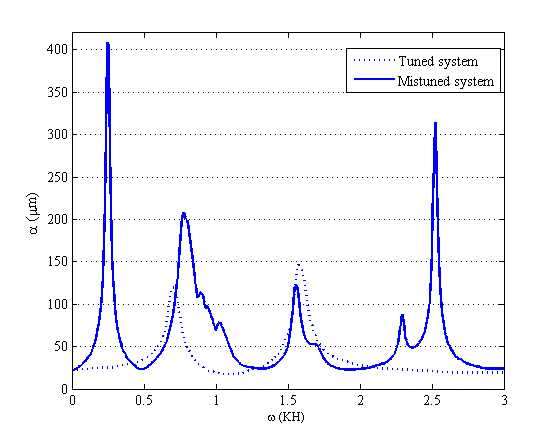 Fig. 3 Comparison between the tuned and the worst response

The same procedure was repeated for the case where the length of each blade was used as the perturbation parameter. In order to investigate the effect of shroud on the frequency response, the worst response of the system with and without shroud were evaluated and compared.

Effect of nonlinearity on the dynamic response of mistuned system

The effects of mistuning on nonlinear behavior of mistuned cyclical symmetric systems like bladed disk are also investigated. A nonlinear, mistuned model (the model is a simple representation of a real bladed disk system) based on the method of multiple scales is proposed and formulated in which nonlinearity and mistuning parameter is assumed to be small. Although a simple lumped model is used for numerical calculations, the techniques can easily utilized for more detailed and complicated models such as finite element. Next, the method of multiple scales is used for finding the forced and steady state vibration response of a nonlinear mistuned lumped model. Several mistuned system were considered and solved by the proposed technique. Numerical results demonstrate that mistuning can lead to repeating and scattering of jump phenomena during the excitation frequency whereas in tuned cyclic system it occurs simultaneously (synchronously). The calculated responses of the 3 DOFs system are depicted in Fig. 4 for forward and backward motions. 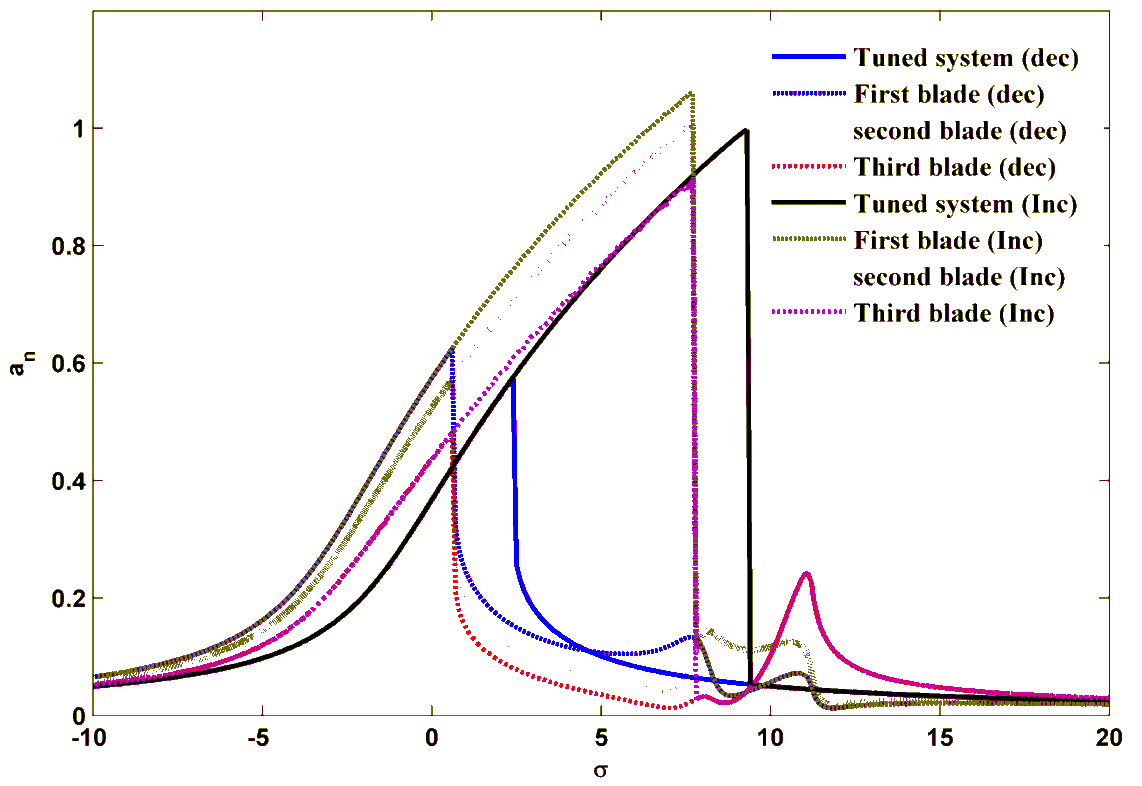 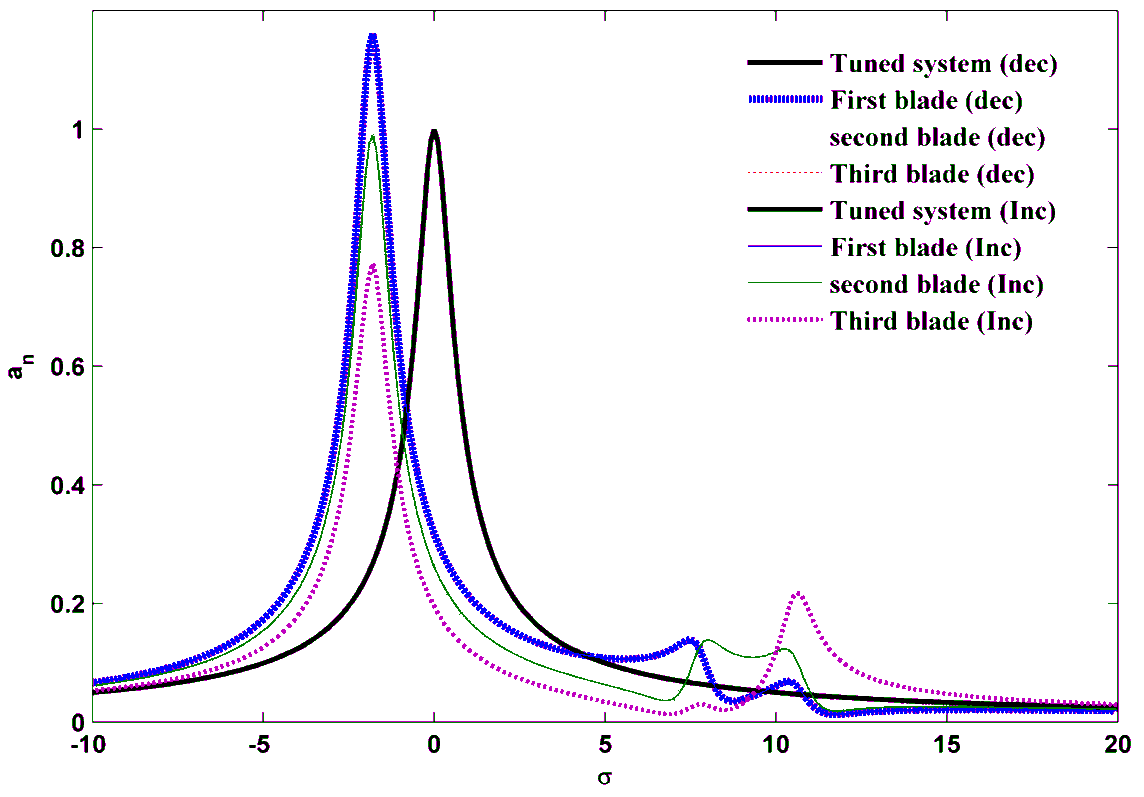 Techniques for reducing the worst response of mistuned systems

A technique using genetic algorithm developed for predicting the worst response of mistuned bladed disk system with internal damping under harmonic excitation. The worst response of the mistuned system was formulated as an optimization problem. Mistuning in blades stiffness, blades damping and blades stiffness and damping were studied and the results were compared. A method for exact calculation of the forced vibration response of mistuned bladed disk is represented which is based on a relationship between tuned and mistuned systems. This method is used in this survey to reduce enormous amount of calculations required for stochastic optimization using genetic algorithm. The problem of finding worst specification is formulated as an optimization problem subjected to constraints such as the manufacturing tolerances. Next, two techniques are used to decrease the worst response of bladed-disk assembly and a 56 blades simplified model with two degree of freedom per blade is illustrated to show the usual mistuning phenomena and the capabilities of the proposed techniques. 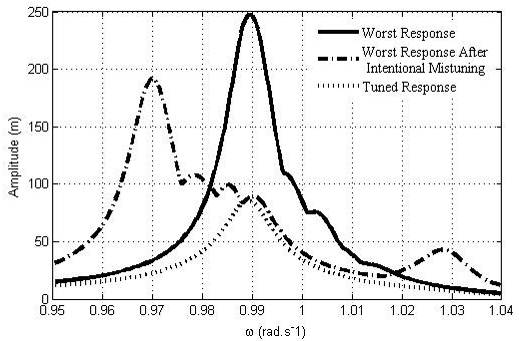 The second method is called re-arrangement of the mistuned bladed disk assembly. The idea is to change the position of blades in an assembly in order to minimize the amplitude of the system worst response. Both techniques, i.e. intentional and re-arrangement are formulated as an optimization problem and solved by use of genetic algorithm. In Fig. 7, the efficiency of rearrangement method is shown by plotting the worst response of the bladed disk before and after the rearrangement. 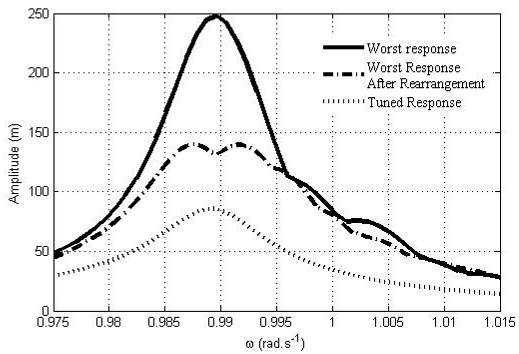 We have 175 guests and no members online